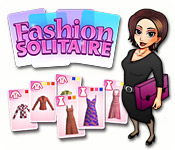 For a long time I wouldn’t play this game. I figured it was too girly, too pink. That it would just be a boring solitaire game with pink pictures of clothes on it. Then one day I got very bored and decided to try it (while my husband wasn’t looking, so I wouldn’t get paid out on).

I very quickly came to admit that it was actually fun and in ways I wasn’t expecting, and I really liked having to try to come up with the right combos for each model. Even though that wasn’t the goal of the game, trying to make the outfits match was fun. I liked the puzzle aspect of it, more than the clothes per se. That being said, I loved the cute red hairdos, and I think the boots go best with skirts or dresses. I also liked to try to make sure the models are wearing jackets with their skimpy tops so they didn’t get cold 😉

My stepson came home while I was playing and was looking over my shoulder while I played. After watching me complete a few of the outfits he asked if there was going to be a fashion parade at the end so I could see all the outfits. So even he was getting into it. 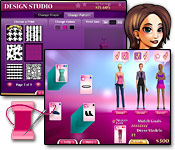 The music is quite pleasant and I don’t mind having it running in the background while I do other things. The card sound effects have the satisfying flick you want, and the other incidental sound effects work in well with the music.

The online version is limited to just the “Night on the Town” style, but you can play it for as long as you like (you’re not required to start from the beginning again, but you can if you want). The only other things that bugged me were that, for the most part, the grey shoes didn’t look right (making their feet look too big), the red cropped jacket rarely looked good in combination with anything, and some of the postures of the models in parts of the game looked a bit off (back arched in a weird way). Occasionally I go out of my way to make ugly combinations for something different.

When the models want a fancy pattern, always prioritise the pattern over the colour of the pattern. For example, there’s a brown and orange top with squares on it. It’s the only item with that pattern, so don’t use it early in the game if you simply need a brown or orange item. Use up extras like handbags, sunnies, purses and jackets early so that you can get to cards further down the pile. When you’re down to the last three models, don’t click “Done?” until you’ve finished all three models. That way you can use the “finished” models to put extras like jackets and handbags on to get at cards at the bottom of the pile.

This game is definitely one of the games I regularly play. Worth checking out the full download version of Fashion Solitaire.

I’ve since played the Fashion Solitaire download game. The coolest differences are: